After a year of remarkable progress that culminated with an educator award, the Office of African American Male Achievement (AAMA) celebrated the Kingmakers and Student Leadership Council (SLC) members in a Crowning Ceremony at the Langston Hughes Performing Arts Institute on June 10.

Kingmakers is an elective program for Black male middle and high school students, referred to as Kings, taught by Black male facilitators. SLC is a collection of Kings from across the district who meet once a week to give a voice to students who do not usually have one. They provide guidance to district leadership on initiatives from the AAMA department. Both programs are structured to empower leadership and love for cultural identity while instilling a sense of belonging and brotherhood.

The purpose of a Crowning Ceremony is to honor the traditions of Black people while embracing the rituals and culture of the Kingmakers organization. The ceremony is meant to acknowledge the journey on which young men are embarking.

The event was full of joy, pride, and culture. In a moving ritual, Dr. Marcia Tate Arunga, academic dean of Evergreen State College Tacoma, poured libation to the ancestors. It was followed by a rousing African drumming ceremony by Mshenga A Babu (Message from the Ancestors) Rhythm Ensemble that got the audience to sing out words of praise and affirmation. Several boys could be seen dancing and singing with smiles on their faces throughout the performance.

Earlier this year, AAMA released its findings in a report called, “Our Voice, Our Vision” which outlines strategies for supporting Black excellence in Seattle Public Schools (SPS). AAMA Project Manager Adam Haizlip and Research Associate Naomi Byrdo invited several students to the stage for a question-and-answer segment to share their views on the benefits of the Kingmakers program and what it needs to do to improve for future students.

William King is a project-program coordinator for AAMA. He said he is proud of the event because it drives home the biggest message touted by Kingmakers: the importance and power in identity.

“Being proud of who you are and acknowledged for it creates capacity for unlimited potential,” King said. “The Crowning Ceremony embodies this message. It’s not about accomplishments or expectations.  It’s simply about celebrating the person – who the King is, has become, and will be.”

During the crowning ceremony, Kingmakers facilitators at participating schools honor each student by calling their name and placing a “crown” – a baseball cap emblazoned with a crown – on their head. The program is in six schools around the district: Aki Kurose, Asa Mercer and Denny International middle schools, Franklin and Cleveland STEM high schools and Interagency Academy.

At the close of the event, AAMA recognized Kingmakers master facilitator Emery Walters from Interagency Academy, who was recently named a 2022 Golden Apple honoree. He believes that when given the right amount of emotional support and academic standard, Black boys and teens will rise to the occasion.

“The thing that I try to do with these young men is not just speak to their position, because their position can change, but I like to speak to their purpose,” he said in a video made by KCTS 9 to celebrate his achievement. “I tell them, ‘I will always meet you where you’re at. I’m not going to come down there, but I will help pull you up, and I will help bring you up to my level.’”

Along with Walters winning the Golden Apple, AAMA had much to celebrate this year. Haizlip, who was the lead organizer of the Crowning Ceremony, also supported AAMA by putting together field trips and events that would be meaningful to Black students. AAMA hosted a workshop aimed at teaching Black families on how to create generational wealth through real estate. They also partnered with multinational construction company, Skanska, to introduce students to jobs that go beyond hammers and nails.

Dr. Mia Williams, assistant superintendent of AAMA, said the partnership with Skanska and other organizations were created to give Black boys and teens in SPS a well-rounded education that allows them to be critical thinkers and to apply learned skills.

“Our students … deserve to receive high-quality instruction every day,” she said. “Most opportunities are outside of the school day – internship and job shadowing. Our goal is to expose our students to all aspects of a career path at all levels of education.”

In April, 40 students from the Kingmakers and SLC got the opportunity to visit a Skanska construction site for a future Sound Transit light-rail station in Lynnwood. Students were able to get hands-on experience from industry professionals in not only construction trades but also some of the corporate jobs in the profession.

Ja’Vaughntae Owens takes welding at Interagency. He initially signed up for the skills class to help improve his grades but in turn, developed a love for it. The field trip opened his eyes to the possibilities of becoming a professional welder.

Kelvin Dankwa is the mentoring program coordinator for AAMA. He spearheaded the Building Generational Wealth Through Real Estate workshop in May. The event was open to Black students across the district, and participants received a timely lesson on the housing market.

“We’ve seen more and more of our people not be able to live in the neighborhoods they grew up in,” Dankwa said. “This workshop gave them some tools to start thinking about homeownership.”

Both Dankwa and King hope to see the program expand in the next three to five years. King wants to see Kingmakers programs in every school, but his biggest hope is that the narrative of brilliance in Black students is elevated through what Kingmakers bring to the field of education.

Dankwa said Kingmakers brings students together in a way where they can be real with themselves and their classmates. He said the bond formed between classmates is invaluable.

“It’s a beautiful thing to see students open up about their story, and Kingmakers’ classmates are honored to be invited in the most sentimental parts of their classmates’ lives,” he said. “I also know that these students have a greater sense of pride as Black boys. Kingmakers offer brotherhood, mentorship, and community; our students need more of that.” 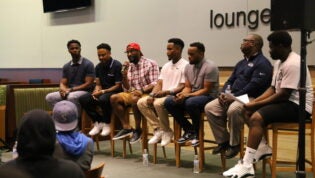 Seahawks help WHOLE Mentees Envision Careers Beyond the Field During a recent WHOLE Mentoring event, students were able to envision a future as a professional within the Seahawks organization.